In this article, We are going to discuss the “difference between Abstract class and Interface in C#” with simple examples. This is one of the most frequently asked questions in almost every C# dot net interview.

First, Let`s take a look at the following list of differences between the abstract class and the interface.

Abstract class: In C#, An abstract class is a way to achieve abstraction, which is intended to hide the internal details and show only the functionality. An Abstract class is not allowed to be instantiated directly instead it is typically used to define a base class in the class hierarchy. It provides the common code implementation to the derived classes.

When to use an Interface in C#?

Below is the list of reasons for using the interface in C#.

You should use an interface if you want a contract on some behavior or functionality to be strictly followed by the subclass or struct. If you use interfaces, you must implement all of the methods in the subclass that extends the interface.

When to use Abstract class Instead of Interface in C#?

This is one of the most frequently asked questions in C# dot-net interviews. Most developers are still not completely sure of the right answer. The following examples are used to illustrate these concepts.

Example of an abstract class in C#

Let’s create a simple program for an abstract class.

What’s new about the interface in C# 8.0

C# 8.0  changed a lot of things about the interface and most of the folks are still not aware of these new changes.

So let’s try to explore the new features of the Interface introduced in C# 8. We will try to understand how we can use these features in our projects with simple examples.

The Default interface method which is also known as the virtual extension method is a new feature introduced in C# 8.0

Example of the default interface method

In the above program, we can see that we have provided the implementation for the method “DefaultInterfaceMethod” in the interface itself. Here, “MyClass” does not need to implement this method.

Change the IDefaultInterface to MyClass, as shown in the below screenshot.

To access the default method of the interface, we must upcast the “myClass” object to the “IDefaultInterface” interface as follows.

Before C# 8.0, Interface members can have implicitly default public access modifier only. Modifiers like  private ,  public ,  protected ,  internal ,  virtual , and  abstract  were not allowed in an Interface.

For additional information on access modifiers in C#, see this link.

Important Key Points About An Interface In C# 8.0

To learn more about Interface, please refer to this article: C# 10 new features

Q: Can you instantiate an interface in C#?

An interface can’t be directly instantiated in C#. However, we can access the data members of an interface by creating an object of the implementing class and then assigning the object to the reference variable of the interface it implements.

The following is a simple example to understand. 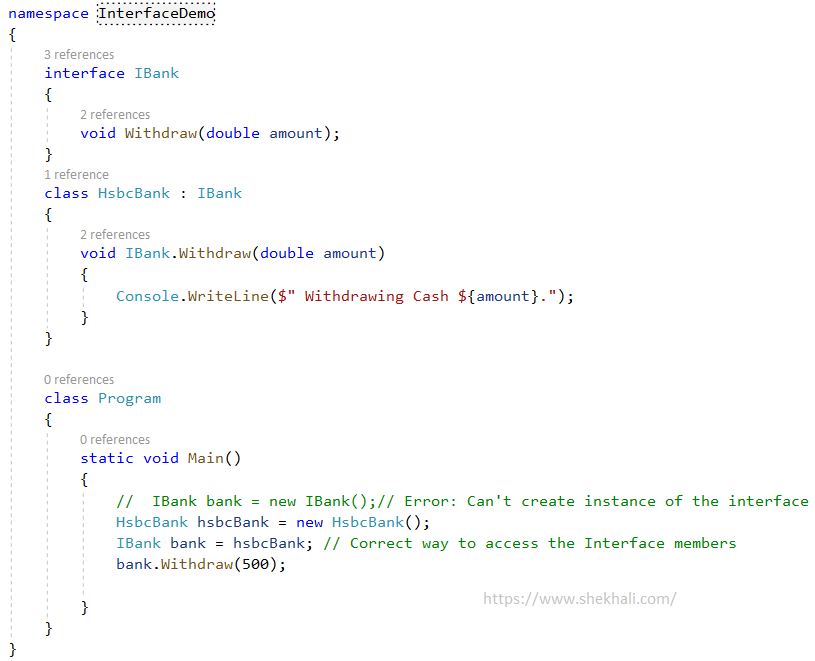 Q: Why can’t we instantiate an abstract class in C#?

Q: Can an interface have a constructor?

Q: Why abstract class is used in C# .NET?

Q: Can we declare the abstract method as static?

No, We can’t declare an abstract method as static because overriding is not possible with static methods.

Q: Can you inherit multiple interfaces in C#?

Yes, A class can inherit (implement) multiple interfaces in C#.

Q: Is it compulsory for the abstract class to have at least one method as an abstract? 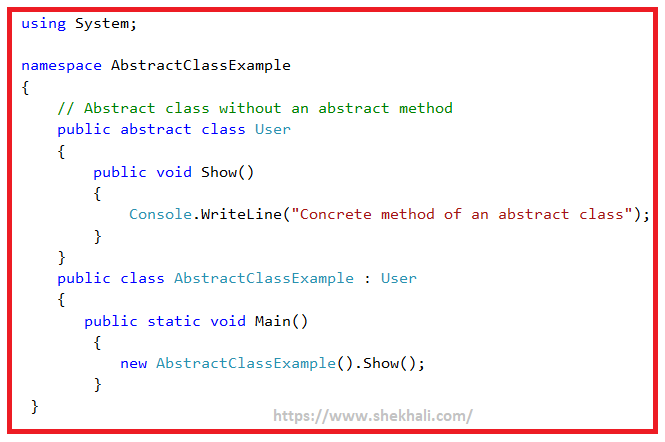 Q: When to use an abstract class vs interface in C#?

In this article, we learned about the ‘difference between the Abstract class and Interface in C#‘ with simple examples. Also, we learned the new features in an Interface introduced in C# 8.

I hope you found this post useful in learning about Abstract class and Interface in C#. Your comments, suggestions, and constructive criticism are much appreciated.

It’s very good stuff and very easy to understand about when we go for abstract class and when we go for interface.
Thanks for sharing your knowledge with us.
Thanks a lot, it’s very helpful for me

This post was very useful, it explained abstract class and interface in a simple way and included real examples which helped a lot. Thank you for sharing your expertise.